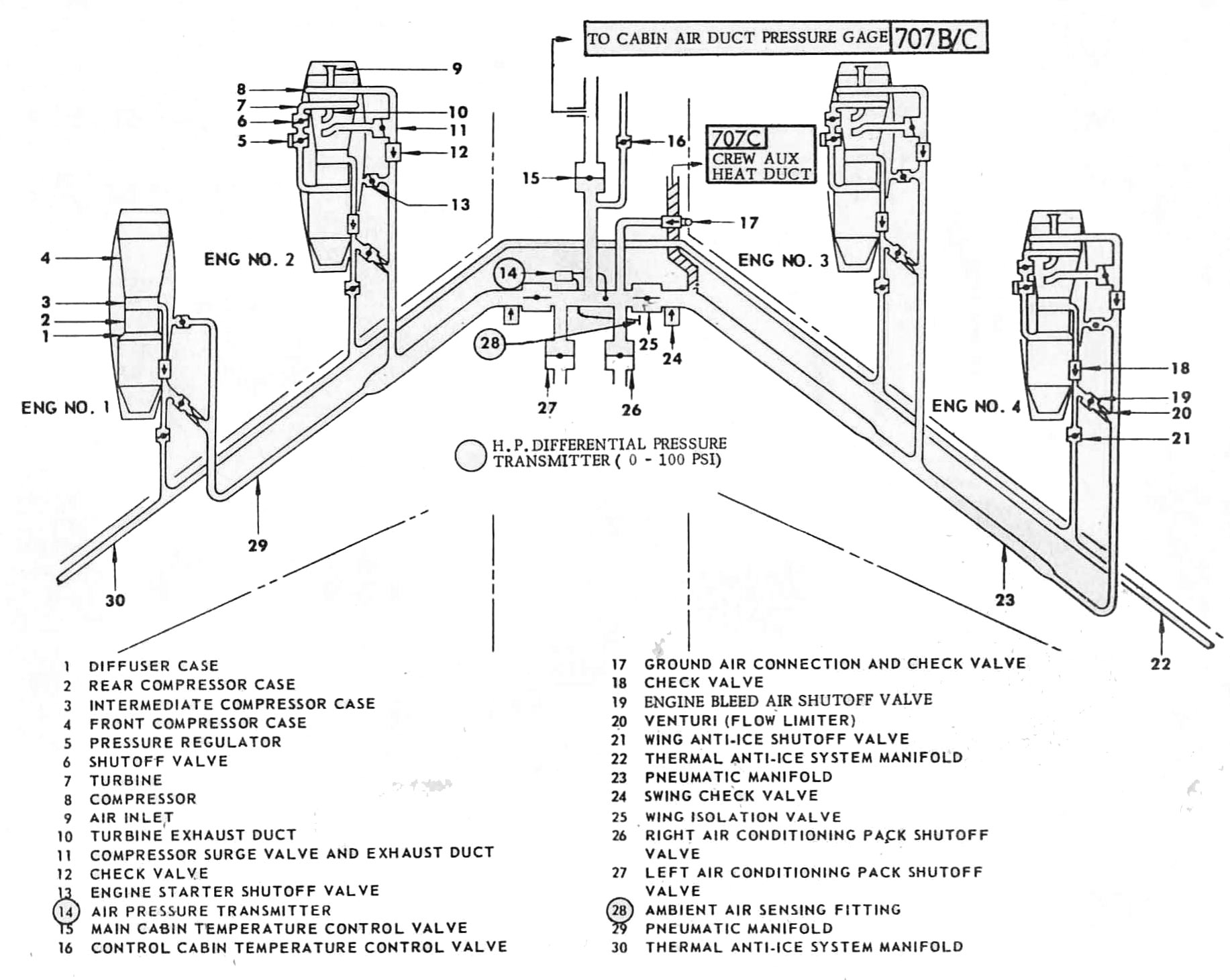 The turbo compressor uses energy of engine bleed air (16th stage) to drive a compressor which sucks in outside air, compresses it, and sends it in for cabin pressurization and heating

TURBO COMPRESSOR SWITCH
When a Turbocompressor switch on an operating engine is momentarily moved to START, a latching part of the switch arms the turbocompressor overspeed trip light and the momentary part of the switch signals the regulator valve to open, which starts the turbo compressor. When the start switch is released, electrical power is removed from the regulator valve and air pressure which opened it now holds it open. This means that an electrical power failure will not stop an operating turbo. If electrical power is lost on an operating turbocompressor, the overspeeed protection will work but the trip light and the oil low Pressure light will not. The low oil pressure light is armed any time normal DC is available.

OVERSPEED PROTECTION
The speed topping control serves to limit the speed of the turbocompressor to a preset maximum of 95% (46500 RPM). Should the cabin air compressor over speed a trip mechanism will operate at 112% (56,000 RPM). It can then only be reset on ground.

Compressed air is supplied by the turbo compressors or the engine air bleeds through the air conditioning
and distribution systems to the pressurized compartments. Cabin pressurization is provided by
controlling the rate at which the cabin ventilating air is permitted to exhaust from the airplane
through cabin pressure outflow valves. Automatic control is provided by a pneumatically operated
cabin pressure automatic controller which allows selecting a cabin altitude from -1000 feet to
+10.000 feet within the differential pressure limit of 8,6 psi; and also provides control of the rate
of change of cabin pressures. A pneumatically y operated manual pressure controller permits rate control
and allows selecting any cabin pressure differential to 9,42 psi should the automatic controller
malfunction. Other system components include filters, pneumatic relays, jet pumps, cabin altitude
indicating and warning devices,
a safety valve, and an electric override mechanism to open or close the outflow valves.
The pneumatic relays alleviate system response time lag. The jet pumps, bleed air operated, provide
a negative pressure source for the automatic and manual controllers and for the outflow. Valves to relieve
the surge effect at the start of cabin pressurization. The jet pumps also assist in depressurizing
the cabin at landing. A cabin altitude warning horn will sound intermittently if the cabin altitude
exceeds 10.000 feet. Positive pressure relief devices protect the airplane against over pressurization.
The automatic controller has a differential pressure relief valve set at 8,6 psi, and each.outflow
valve has a 9;42 psi differential relief valve. Decompression panels are provided in bulkheads
between pressurized sections to provide local structural protection should the airplane become rapidly
depressurized at altitude. Pressure relief valves are also provided in the aft bulkhead of each
lower cargo compartment to equalize pressure with the adjoining compartment.