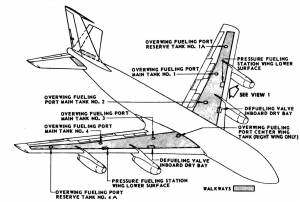 Fuel from the reserve tanks can be used only after it has been transferred by gravity through reserve tank fuel transfer valves to adjacent outboard main tanks. Each fuel tank, except the two reserve tanks, is
equipped with two electrically powered boost pumps. Fuel can flow from a main tank to its respective engine by gravity, but center tank fuel can be supplied to the engine only if an override fuel boost pump is operating. Intertank transfer of fuel between main and center tanks is prevented by check valves.

Dripsticks are installed to measure the actual fuel level in each tank to have an independent fuel quantity information without using the electrical operated fuel quantity indication system used during flight. Fuel system controls are on the FIE’s lower panel, lower auxiliary panel, upper panel and upper auxiliary panel. Fuel system indicators are on the pilot’s center panel and the FIE’s lower panel. For standard
fueling an underw 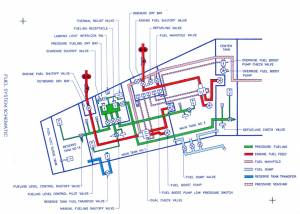